Brumbies flyhalf Noah Lolesio has missed a sideline conversion on the final siren as the Crusaders escaped with a thrilling 31-29 win in Christchurch.

The Crusaders were cruising to victory after skipping out to a 31-17 lead with just 10 minutes remaining in Saturday night’s Super Rugby Trans-Tasman clash.

A magical solo try to Brumbies fullback Tom Banks – when he shook off three tacklers in a 62 metre sprint to the line – got the visitors back in the game in the 72nd minute.

A 79th-minute yellow card to Crusaders substitute Ereatara Enari further opened the door, and the margin was just two points when a clever inside flick from Brumbies winger Tom Wright sent No.8 Rob Valetini over.

It left Lolesio with a chance to draw the game, but he squeezed the tough sideline conversion to the left to narrowly miss as the final siren sounded.

Lolesio hunched over in disappointment, but his teammates ran in to console him after what had been a remarkable late fightback from the Brumbies.

“Definitely proud of the effort, especially the fight we showed in the second half,” Brumbies captain Allan Ala’alatoa told Stan Sport after the match.

“Looking at the boys, we’re devastated at the loss. We came out here to win.” 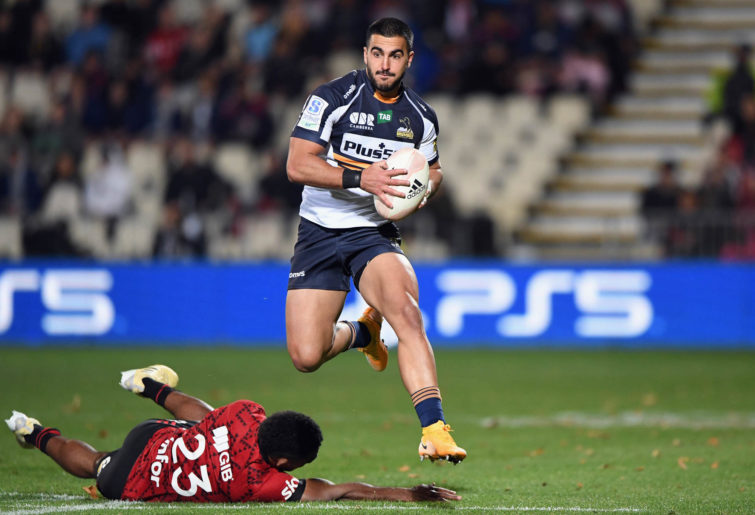 “The Brumbies came and took it up to us,” he said.

“(We had) tired legs from last week, but you can’t blame that. It’s a new competition and you’ve got to step up. It wasn’t good enough, but we came away with the win.”

The first 20 minutes was a dour affair filled with failed scrums and uncharacteristic handling errors.

The one bright spark was a fifth-minute try to flanker Ethan Blackadder, who got on the end of a nice Crusaders move to touch down in the corner.

Scott Sio barged over on 27 minutes to give the Brumbies the lead, but the Crusaders hit back with two more tries to finish the half.

Flyhalf Richie Mo’unga threw a dummy to fool the Brumbies defence in the 29th minute.

And seven minutes later Havili intercepted a pass from Brumbies scrumhalf Ryan Lonergan before embarking on a 50 metre sprint to the line, giving the home side a 19-7 halftime lead.

The Crusaders dominated the early stages of the second half, but it was the Brumbies who struck first when Simone picked up the ball from a breakdown and touched down under no pressure.

Brumbies substitute Luke Reimer pulled off a brilliant try-saving tackle to deny Blackadder in the 60th minute, but tries to Brendon O’Connor and Cullen Grace within six minutes of each other looked to have sealed the win.

The Brumbies attacked hard at the death, and they came within a whisker of coming away with the draw in a gutsy effort against the NZ champions.