“A real shame”: Scott Robertson laments the “gulf” between NZ and Australian rugby

The Queensland Reds’ record 63-28 loss to the Crusaders in Saturday’s battle of the respective Super Rugby champions made it two perfect rounds and a 10-0 head-to-head record for New Zealand teams.

It followed a heavy loss for the Brumbies, while the NSW Waratahs suffered a franchise-record 10th straight loss and defeats for the Melbourne Rebels and Western Force ensured Australian outfits occupy the bottom five spots on the ladder.

A combined score of 416-214 across the 10 games, with an average margin of 20 points – even with the Brumbies’ and Force’s two and one-point losses last week – has swallowed up the feelgood factor that had built in Australian rugby ahead of Tests against France in July.

Robertson believes the Reds, the new benchmark of Australian rugby after pipping the Brumbies in the final a fortnight ago, have all the pieces but not the intensity to match his well-oiled champions.

“The Aotearoa was tough, brutal and the guys talk about it like playing Test matches,” he said of the New Zealand competition they won.

“I would have liked Australian teams to knock off a few of the Kiwi teams to make the ladder a little more even.

“There’s a gulf isn’t there, which is a real shame. 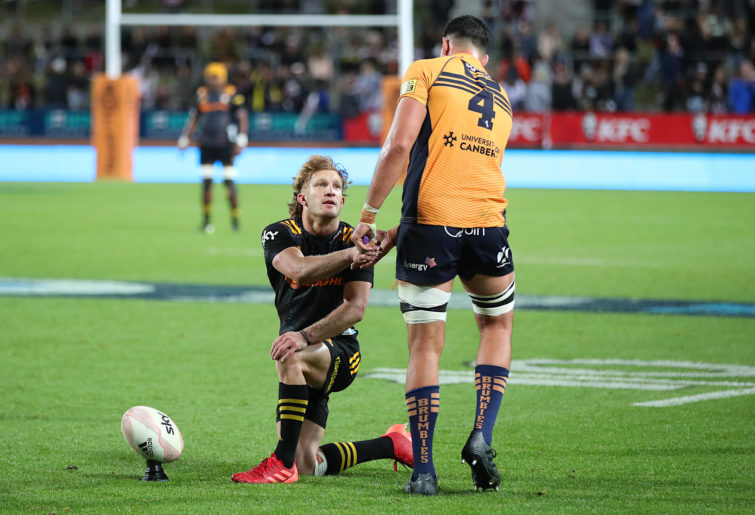 Damian McKenzie of the Chiefs shakes the hand of Darcy Swain of the Brumbies. (Photo by Michael Bradley/Getty Images)

“The rest of this comp’s really important for Australian rugby to show a bit for their supporters.”

Former Wallabies coach Cheika wants to see an immediate response but admitted the Reds, who went 8-1 through the domestic competition including the final, had been toyed with by arguably the world’s best provincial outfit.

“We had a saying in the old days, ‘welcome to first grade’, and it was first grade tonight. They were top quality,” Cheika said of the Crusaders on Stan Sport.

“The Reds got a bit rattled, started following the Crusaders around and they’ll lead you on a merry dance.

“We’ve been pumped alright, but you just have to fight back next week, get over it and get back up on your bike and win the next game.”

Reds coach Brad Thorn, who won a title as a player with the Crusaders in 2008, said the result was proof a purely domestic format was not the answer.

“I’ve said all year we need to play the New Zealanders if you want to get better,” he said.

“Tonight you get a punch in the face, but you sit in the locker room afterwards and think, ‘that’s it, that’s where we want to be’.

“But there’s a team that’s far superior tonight and you’ve got to wear that … welcome to world-class, now you’ve got to get in the ring with them.”

The Force play the Hurricanes on Friday while on Saturday the Reds host the Chiefs in Townsville, the Waratahs meet the Crusaders in Wollongong, the Brumbies visit the Blues at Eden Park and on Sunday the Highlanders host the Rebels.