Why did the Super Rugby AU side cross the road?

To avoid another loss to an Aotearoa team.

This is getting very close to being ridiculous. One round of all Kiwi victories was one thing but with two rounds of convincing wins now in the can, it’s getting to that awkward part of the School Sports Day where the staff are wondering if they’ve brought enough participation trophies.

However, despite the one-sided league table and talk from people like Scott Robertson of the gulf between the two competitions, there’s still plenty to argue about, so let’s get stuck in.

Stop kicking the ball away
One of the consistent factors that has caused the Australian teams issues has been their poor kicking. Whether it’s exiting their 22 or box kicks or cross field kicks, every week sides are putting themselves under so much pressure with poor kicking.

Ryan Lonergan was guilty of this a lot this week against the Chiefs but his poor kicking from the base of the ruck is repeated by far too many Aussie scrum halves. First of all the kicks are so obvious that the defences have plenty of time to set up. Secondly, more often than not the kicks are too long so that the defence have time and space to take the catch and launch a counter.

Whilst we’re on it, what’s just as frustrating as the poor kicking is the poor chasing. The prime example was again the Brumbies where as the ball came down from an up and under, there were four Canberra men watching the ball and one Chief actually trying to catch it. This has got to break coaches’ hearts – it’s not about skill, or fitness. It’s just about trying to catch the damn ball!

The ball is a precious thing in rugby. The Kiwi teams have some pretty decent back three groups. So why give that precious ball to talented ball runners who are just waiting for an opportunity to run back at you?

Kiwi teams dominating the first 20 minutes
The scorelines come the final whistle have been far too one-sided but the issues are all starting in the opening 20 minutes of the games.

The Kiwi sides are getting off to such good starts that even if and when their Australian opponents launch a fightback, there’s just too much ground to make up.

The Reds, down by 21 points after 15 minutes. The Brumbies, behind by 7 points after 20 minutes and then 14 points by the half-hour mark. The Tahs 15 points down by the same point. Too many times Aussie sides are struggling to exit their 22 effectively from kick offs and it just puts pressure on themselves straight away.

The Rebels look like winning (a wooden spoon)
It’s not just that the Rebels lost again – the entire AU competition can lay claim to that sad title – it’s how they lost the game that is frustrating and concerning.

The good news is that they didn’t get blown apart like they did in Round 1. In fact with 25 minutes to go they were only behind by six points and were still very much in the game. But at this point the game really turned and it turned in such a disappointing fashion.

The Rebels had the ball and Isi Naisarani takes it up into contact. He gets picked up and dumped back by two Canes defenders and then the Canes are able to counter ruck and steal the ball back. Bill Proctor darts ahead, breaks through two or three tackles and then unleashes Julian Savea to score his second try of the night.

So many frustrations! First, as Naisarani is tackled and tries to present the ball back there are six of his Rebel teammates standing around him who then do pretty much nothing useful in terms of securing the ball. A couple have overrun the big No.8 whilst others sort of just assume the Canes will let them have it.

Where’s the intensity to get that ball, where’s the basic skills? 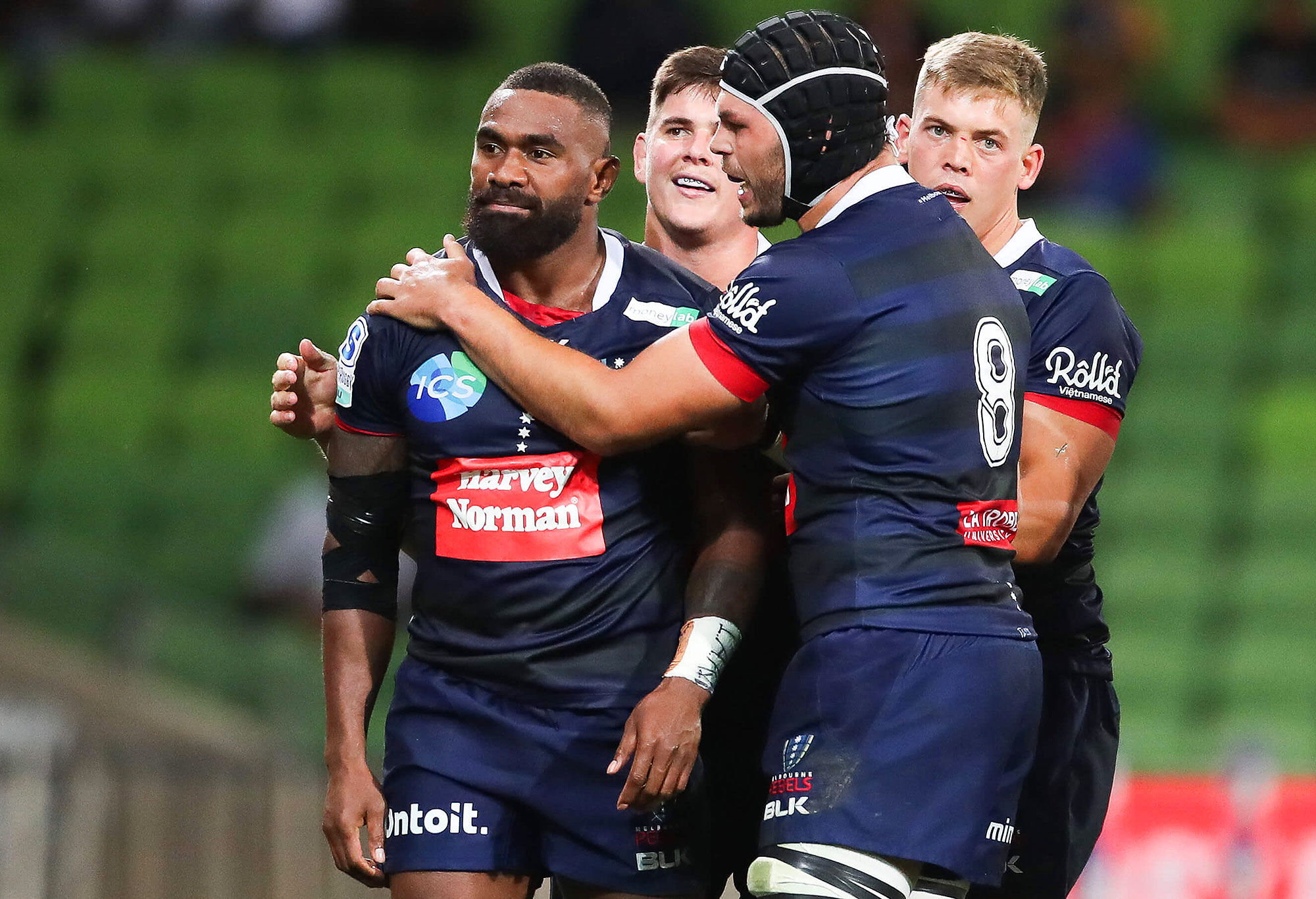 It’s not surprising that then two internationally capped Rebels – Powell and To’omua – then miss the tackle on Proctor when you consider that the team as a whole missed 30 per cent of their tackles all night long.

Yes the Rebels were better than last week but you know what, not by much and let’s not even mention how it’s possible that they have a player like Marika Koroibete and can’t help him score a single try all season.

Expect future articles from many writers to focus on the well-visited topic “Why the Rebels have no place in Super Rugby.”

In the Force vs Highlanders game and Chiefs vs Brumbies we had two situations that were very similar but one led to a yellow card and one just a penalty. That can be a crucial difference in a match.

We can’t get into a situation where defenders are being penalised for something they have no control over. There are those who feel that a defender shouldn’t put themselves in the position where they can end up on the wrong side of the rules, but surely there is a limit here to how much we can expect of the defender in a split second.

If they are aiming to tackle an opponent around the chest that is perfectly fair and it’s not good for the game if they can end up getting sin-binned because an attacker slips or ducks to mean the tackle ends up higher.

Rob Valetini vs Luke Jacobson was fascinating
Two of the most impressive players this season have been the No.8s from the Brumbies and Chiefs. Both are young (Valetini is 22 Jacobson just two years older) and both have had a taste of internationals without yet firmly establishing themselves as first XV starters.

On Saturday they came head to head and Jacobson walked away with the honours. The attacking stats show a big difference when it comes to impact on the game:

Valetini didn’t have a bad game but Jacobson had a really good game and was a constant threat to the Brumbies as their defence kept having to cope with the big runner.

To be fair, in terms of defence, the Brumbies back-rower was more effective than his opponent but with their scrum being dominated, what the visitors really needed was a big offensive performance from Valetini to get his team on the front foot.

It was a great battle to watch and showed some interesting differences between approaches with Jacobson regularly able to run into gaps in the Brumbies defence whereas Valetini gained hard-earned metres running into defenders. The scoreboard helps you to decide which was more effective.

We may well get to see these two again in the Bledisloe and it’ll be another fascinating battle….probably with the same result.

Are there any benefits for the Aussies in this weekly demolition?
Now there are still three rounds to go – that’s 15 matches where Australian sides could pick up some wins. But let’s face it – of those 15 games, the Kiwis are going to win at least 10 of them if not more.

With the combined scoreboard currently sitting at 416 versus 214 and an average losing margin of 20 points you do have to start wondering whether there are any benefits to the Trans-Tasman competition for the Australian teams.

There are those that are saying that it’s crucial to play against the best to learn how to get better. That makes theoretical sense for sure but when you factor in that the Aussie teams have been playing against the Kiwis for many years there doesn’t seem to be any evidence that playing the best in the world is helping the AU teams get better.

It’s perhaps highlighting how crucial it is that Rugby Australia stop losing talent to overseas leagues. With Marika Koroibete likely heading to Japan at the end of this season, Australia loses yet another top-quality player to the lure of a new experience, a new culture and a significant pay rise.

It’s great to see crowds back in the stadia of course – you do worry however whether those crowds will stay the same if every week the home Australian side is 90 per cent likely to get beaten up.

So given that the Kiwi teams are running away with the competition in 2021, what should success look like for each AU team? The Reds and Brumbies surely should be aiming at three wins each. The Tahs and the Rebels – well maybe conceding only 4 tries per game? And the Force – perhaps a victory and showing that they can be just as hard to beat on the road as they are in Perth?